How to change the default terminal emulator on Windows

In fact, Windows does not provide official way to change the default terminal application. That is because console subsystem is a part of Windows kernel (csrss.exe up to Vista and conhost.exe in Windows 7 and higher).

Only use of hacking methods can ‘change’ default Windows terminal application. And ConEmu can do it!

WARNING! Enabling ‘Default terminal’ feature may cause false alarms in some antiviral programs. However there were no issues about that yet.

Inspired by SuperUser’s and StackOverflow’s questions 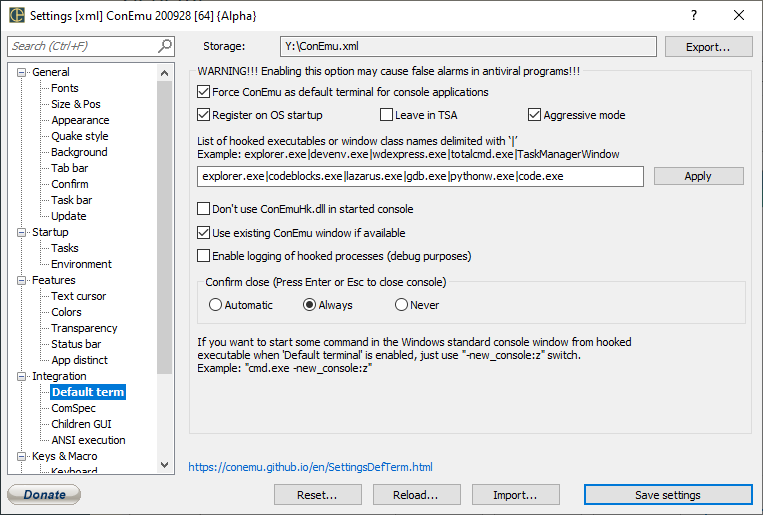 You may press Win+R type ipconfig /all and press Enter. It will starts in the new ConEmu tab. And more, it will not unexpectedly disappear after ipconfig finishes if ‘Confirm close’ option is set to ‘Automatic’ or ‘Always’.

The only exception - consoles started ‘As administrator’ can’t be hooked yet.

Note! To ensure that your console application will be seized, run ConEmu before starting your consoles or debugging processes (from Visual Studio for example). However, that may be not required if you choose ‘Register on OS startup’. But in fact, ‘registering’ will affect, in most cases, only explorer.exe ‘parent’ process. So, recommendation is ‘run ConEmu before…’

‘Default terminal’ feature is more powerful than ‘Automatic attach of cmd’ (‘ComSpec’ page). ‘Default terminal’ can seize starting of any console program, not only cmd.exe. For example, you may dblclick on ipconfig.exe in Total Commander panel and voila… Also there will be no flickering of real console window.

Force some application within standard terminal

If You need to run some console application in the standard Windows console there is no need to disable ‘Default terminal’ feature completely, just use -new_console:z switch. For example, run from Win+R:

The only real way to ‘change’ default Windows terminal:

Looks simple, right? But who can perform these actions?

Hooks must be installed

ConEmuHk (ConEmuHk.dll or ConEmuHk64.dll) must be loaded into process space of ‘parent’ application from which you are starting new console application: Explorer (explorer.exe), Task manager (taskmgr.exe), Visual Studio (devenv.exe or WDExpress.exe), and so on…

When ConEmuHk is loaded into ‘parent’ application it will hook limited set of Windows API functions related to creating new processes. So, when you start console application from shortcut, Win+R or even from Visual Studio debugger, ConEmuHk will change application startup procedure to the described above.

When you run “cmd” from Win+R and no ConEmu instance was runned:

And when ConEmu window already exists:

That is safe because ‘parent’ does not really need to get started process handle (cmd.exe in example).

That is why RealConsole window will flicker on screen before alternative attach procedure completes.

Note, when you are debugging .Net console application, Visual Studio will run ConAppSample.vshost.exe, if option ‘Enable the Visual Studio hosting process’ is checked in your project Properties\Debug.